Darrien Jordan was “planning a big change in his life,” a long-time friend said. 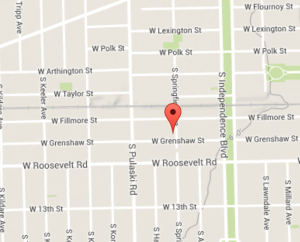 Jordan’s life was cut short before he had the chance when he was fatally shot Tuesday afternoon during a fight near his home in the 3900 block of West Grenshaw Street, authorities said.

“Darrien was funny, goofy, outgoing,” said close friend Savoia Johnson. “He was somebody that made you smile.

“He wanted to move away from the city and start fresh. He really didn’t deserve this.”

Chicago Police are questioning a “person of interest” Wednesday afternoon. Johnson said she knows the gunman in question, but doesn’t know why he pulled the trigger.

“Darrien and him were friends, buddies. I knew both of them,” Johnson said. “That’s why it’s so hard to believe he shot him. You always think it’s going to be a stranger, not someone you know, not a friend.”

Jordan and Johnson went to Frasier Grammar School together and remained close friends since childhood. Jordan had recently quit drinking and smoking in an attempt to “turn his life around” and achieve his goals.

“It’s hard because he was going down a tough road for so long, and when he finally started making positive changes and turning his life around, he gets killed for nothing,” Johnson said.

He loved music, spending time outside and could often be found entertaining friends with freestyle rhymes, she said.

“He mostly did [freestyle] to make people laugh, but he was great,” Johnson said. “He freestyled about life. It was really like a work of art.”

This isn’t the first time 19-year-old Johnson has been personally touched by Chicago’s gun violence, and knew many people who have been victims.

“I’m shook up. I honestly feel like the world is coming to an end,” Johnson said. “The violence is everywhere.”